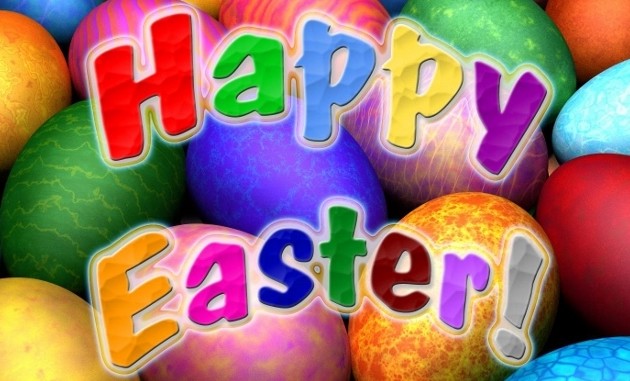 Lots of rental Bunny Suits for Easter with either Mascot Heads, soft heads or hoods. Retail bunny suits available for all ages. Biblical costumes for kids and adults to rent and to buy. Balloons and paper goods too.

Take a look at some of our rental Easter Bunnies. We have styles with large mascot heads, or smaller, soft heads, or open face hoods to fit every budget, in all sizes. Order early to assure you get the style you want. Corporate clients welcome. We have multiples of some styles for your multiple location needs. 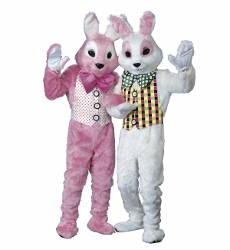 Here are some of our custom made Easter Hats by Tammy & Janae. Come on in for ideas and supplies to build your own!

A couple of fun Easter hats designed by Janae and Tammy a few years ago for their Easter festivities.  You, too, can design your own fun headwear!  Come on in and we’ll give you ideas and all the bits and pieces you’ll need.

This holiday is observed by the Christian churches of the West on the first Sunday following the full moon, that occurs on or following the spring equinox (March 21st). So it is a “movable” holiday, which can occur as early as March 22 or as late as April 25.

A HISTORY OF EASTER CELEBRATIONS

Christian churches in the East, which were closer to the birthplace of the new religion and in which old traditions are stronger, observe Easter according to the date of the Passover festival, usually about a week after the date observed in the West.

Easter is at the end of the Lenten season, which covers a forty-six-day period that begins on Ash Wednesday and ends with Easter. The Lenten season itself comprises forty days, as the six Sundays in Lent are not actually a part of Lent. Sundays are considered a commemoration of Easter Sunday and have always been excluded from the Lenten fast. The Lenten season is a period of penitence in preparation for this, the highest festival of the church year.

Holy Week, the last week of Lent, begins its with the observance of Palm Sunday. Palm Sunday takes its name from Jesus’ triumphal entry into Jerusalem where the crowds laid palms at his feet. Holy Thursday commemorates the Last Supper, which was held the evening before the Crucifixion. Friday in Holy Week is the anniversary of the Crucifixion, the day that Christ was crucified and died on the cross. Holy week and the Lenten season end with Easter Sunday, the day of resurrection of Jesus Christ.

Today Easter is a time of springtime festivals. Celebrations have many customs and legends that are pagan in origin and have nothing to do with Christianity.

Scholars, accepting the derivation proposed by the 8th-century English scholar St. Bede, believe the name Easter is thought to come from the Scandinavian “Ostra” and the Teutonic “Ostern” or “Eastre,” both Goddesses of mythology signifying spring and fertility whose festival was celebrated on the day of the vernal equinox.

Traditions associated with the festival survive in the Easter rabbit, a symbol of fertility, and in colored easter eggs, originally painted with bright colors to represent the sunlight of spring, and used in Easter-egg rolling contests or given as gifts.

The Christian celebration embodies a number of converging traditions with emphasis on the relation of Easter to the Jewish festival of Passover or Pesach, from which is derived Pasch, another name used by Europeans for Easter. Passover is an important feast in the Jewish calendar which is celebrated for 8 days and commemorates the flight and freedom of the Israelites from slavery in Egypt.

The early Christians, many of whom were of Jewish origin, were brought up in the Hebrew tradition and regarded this holiday as a new feature of the Passover festival, a commemoration of the advent of the Messiah as foretold by the prophets.