We  have retail costumes as well as a few former rentals that are in great condition on sale for 50% OFF.   Here are some samples of our Rental and Retail Santa Suits. They are available all year for photo shoots or your wardrobing needs. 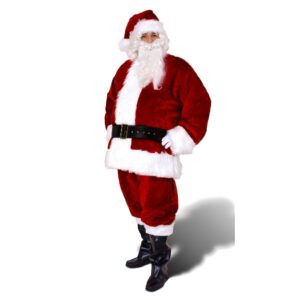 The history of Christmas dates back over 4000 years. Many of our Christmas traditions were celebrated centuries before the Christ child was born.

The 12 days of Christmas, bright fires, the Yule log, the giving of gifts, carnivals, parades with floats, carolers who sing while going from house to house, the holiday feasts, and the church processions can all be traced back to the early Mesopotamians.

Many of these traditions began with the Mesopotamian celebration of New Years. The Persians and the Babylonians celebrated a similar festival called the Sacaea.

Early Europeans believed in evil spirits, witches, ghosts and trolls. As the Winter Solstice approached, with its long cold nights and short days, many people feared the sun would not return. Special rituals and celebrations were held to welcome back the sun.

In Scandinavia during the winter months the sun would disappear for many days. After thirty-five days scouts would be sent to the mountain tops to look for the return of the sun. When the first light was seen the scouts would return with the good news. A great festival would be held, called the Yuletide, and a special feast would be served around a fire burning with the Yule log.

The ancient Greeks held a festival similar to that of the Zagmuk/Sacaea festivals to assist their god Kronos who would battle the god Zeus and his Titans.

The Roman’s celebrated their god Saturn. Their festival was called Saturnalia which began the middle of December and ended January 1st. With cries of “Jo Saturnalia!” the celebration would include masquerades in the streets, big festive meals, visiting friends, and the exchange of good-luck gifts called Strenae (lucky fruits).

The Romans decked their halls with garlands of laurel and green trees lit with candles.

The Religious Meaning of Christmas

When Rome was a great Empire ruled by Caesar Augustus and Israel was governed by King Herod, in the village of Nazareth lived Joseph and Mary. Joseph was a carpenter and Mary was a young virgin who would become his wife. Mary told Joseph of a dream in which she was visited by an angel who told her she had been chosen to bear the Son of God and his name was to be Jesus.

One day the emperor sent notice that all persons were to register for a new tax. They were instructed to return to the towns of their birth. Joseph and Mary left Nazareth for Bethlehem. Mary who was with child, and close to the birth, rode on a donkey while Joseph walked beside her. They traveled for many days and only rested at night.

When they reached Bethlehem it was night. They looked for a place to rest but there were no empty rooms when they reached the inn. As they were being turned away Joseph mentioned his wife was with child and close to birth. The inn keeper took pity on them and told them of some caves in the nearby hills that shepherds would stay with their cows and sheep.

So Joseph and Mary went up into the hills and found the caves. In one cave was a stable room. Joseph cleaned it and made beds of fresh hay. He found a feeding trough which he cleaned and filled with hay to use as a crib. The next night Mary gave birth to a son and they named him Jesus, as the angel had said.

When the child was born a great star appeared over Bethlehem that could be seen for miles around. In the fields nearby shepherds were tending their flocks. An angel appeared to them surrounded by bright light. The shepherds were frightened and tried to run.

“Fear Not,” said the angel, “For I bring you tidings of great joy. For unto you is born this day in Bethlehem – a Savior who is Christ the Lord.”

“And this shall be a sign unto you. You shall find the babe wrapped in swaddling clothes and lying in a manger.”

Suddenly the sky was filled with angels, praising God and saying, “Glory to God in the Highest, and on Earth peace, good will toward men.”

After the angels departed the shepherds set out for Bethlehem. When they reached the cave they found the stable and inside was the child wrapped in swaddling clothes.

As the star shined over Bethlehem, in the east three kings would see it. They knew it was a sign and they set off to follow the star. There was Caspar – the young King of Tarsus, Melchior – a long bearded old man and leader of Arabia, and Balthazar – the king from Ethiopia. They traveled on camels for many days over the mountains, and through the deserts, and plains. Always following the bright star.

When they finally arrived in Bethlehem they found the child in the manger. The 3 kings bowed to their knees and offered gifts of gold, frankincense, and myrrh. They would stay the night in the cave and the next day returned to their lands to spread the news.