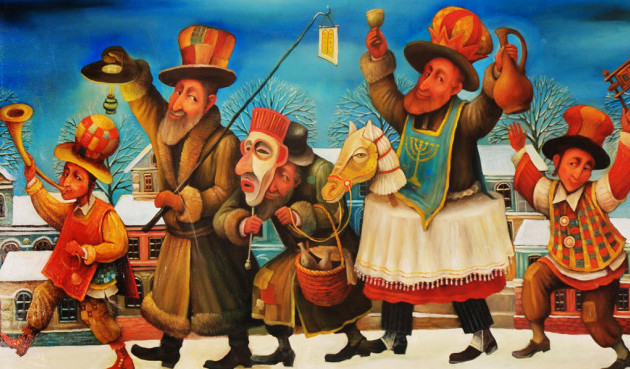 Costumes and accessories for the Purim holiday are here at Etoile Costume & Party Center. Be sure to check your local temple for the date of the Purim festival near you.

Purim is the most festive of Jewish holidays, a time of festivals, prizes, noisemakers, costumes, and treats. The Festival of Purim commemorates a major victory over oppression and is recounted in the Megillah, the scroll of the story of Esther. Purim takes place on the fourteenth and fifteenth days of Adar, the twelfth month of the Jewish calendar.

A LITTLE HISTORY OF PURIM

It all began in Ancient Persia in the 4th century BCE. The Holy Temple that had stood in Jerusalem was destroyed more than 50 years earlier, and the Jews were subjects of the mighty Persian empire which extended over 127 lands.

In the third year of his reign, the King of Persia, Ahashverosh decided to have a feast. On the seventh day of these festivities the King summoned his queen, Vashti, to appear before him and demonstrate her beauty for the King’s officials. Vashti refused to appear.  Incensed, the King asked his officers for a suitable punishment. One advisor, Memuchan (Haman), argued that Vashti should be killed for her disobedience.  Vashti was killed.

As time passed the King desired a new queen. To find a suitable wife, a contest was initiated among all the eligible girls in the kingdom. One of those was Esther, a Jewish girl. Esther had been raised by her relative Mordechai after her parents’ death. Mordechai instructed Esther not to divulge her Jewishness when she went to meet the king. Each day Mordechai walked by the court and inquired as to her well being. Esther impressed all who met her, including the King, and she was elevated to queen.

Years later the King elevated Haman, a descendant of Amelak, the traditional enemy of the Jews, to the position of chief advisor. Haman was a wicked and vain man who expected everyone to bow down to him. Mordechai refused to bow because Jews are to bow only before God. Not content to just punish Mordechai, Haman wanted to destroy the entire Jewish people in Persia. He cast lots or PURIM to determine the day of annihilation.

Haman went to the King, slandered the Jews, and convinced the King to go along with his plans. Upon learning of the plot, Mordechai tore his clothes, wore sackcloth and ashes, and walked through the city crying loudly. When Esther heard of Mordechai’s display she dispatched a messenger to discover what was troubling her relative. Mordechai recounted the details of the evil decree and instructed Esther to intercede on the Jews behalf. Esther agreed to appear before the King and instructed Mordechai to organize a three-day fast for all the Jews on her behalf.

After completing the three-day fast, Esther entered the king’s inner court dressed in her most royal garb. The King inquired as to Esther’s desires. Esther replied that she wished to invite the King and Haman to a banquet. After the feast Esther asked the King and Haman to return for another banquet the next night. Haman left the banquet consumed with self importance and pride, but these feelings were turned to anger when he saw Mordechai. He went home, and his wife, Zeresh, advised him to construct a gallows. He joyously acted upon the suggestion.

That night, the King discovered that Mordechai had never been rewarded for saving him from the assassination plot of two servants. When Haman appeared in the court, the King decided that his trusted servant should determine Mordechai’s reward. Haman, intending to obtain the King’s permission to hang Mordechai, unwittingly answered the King’s questions. The King asked Haman, “What should be done for the man the King wishes to reward?” Haman, believing that Ahashverosh intended to reward him, replied that the honoree should be dressed in royal clothing, ride upon a royal horse. And be led through the city streets by an official proclaiming “This is what is done to the man the King wishes to honor”.

Ahashverosh agreed and instructed Haman to carry it out for Mordechai, Crestfallen, Haman followed the King’s orders. Haman’s daughter, mistakenly believing that her father was being led by Mordechai, dumped garbage on her father, the horses’ leader.

At Esther’s second banquet Haman’s downfall continued. Esther revealed Haman’s villainous plot and the fact that she was Jewish. She asked the King to “grant me my soul and my people.” Ahashverosh consumed with anger ordered that Haman be hanged on the gallows intended for Mordechai. The King elevated Mordechai to a position of great influence and allowed him to issue edicts permitting the Jews to fight their enemies. On the thirteenth and fourteenth of Adar the Jews won tremendous victories and were saved from the threat of total annihilation.

Ever since, Jews have observed Purim. The day before is a day of fasting, in memory of Esther’s fast; then followed by two days of dancing, merrymaking, feasting and gladness.

We are located at 18849 Ventura Boulevard, between Reseda Boulevard and Tampa Avenue, in Tarzana;  a San Fernando Valley suburb of Los Angeles.  Our customers come from as far away as Santa Clarita to the north, Orange County to the south, Pasadena to the East and Westlake Village to the West…and everywhere in between.