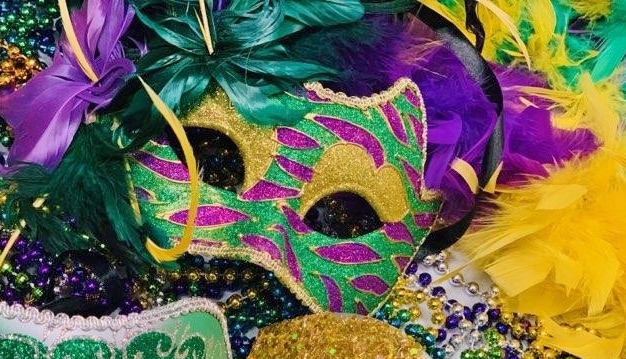 Be sure to check out our elaborate rental costumes and pick up some festive beads, masks, hats and decorations. Anything goes for Mardi Gras attire.

Mardi Gras means “Fat Tuesday” and, of course, is traditionally celebrated on that day of the week.  There are parties and parades for weeks before Fat Tuesday.   Officially, Mardi Gras starts on the 6th of January, and runs until Fat Tuesday. In New Orleans, the majority of Mardi Gras celebrations are held in the two weeks leading up to Fat Tuesday itself.

The date can fall between February 3 and March 9 depending on the Lunar calendar, used by the Catholic Church to determine the date of Easter. Mardi Gras is always 47 days before Easter Sunday.

The official colors for Mardi Gras are purple, green, and gold. These colors were chosen in 1872 by the King of Carnivale, Rex. He chose these colors to stand for the following:

the New World. In mid February the ancient Romans celebrated the Lupercalia, a circus like festival not entirely unlike the Mardi Gras of today. When Rome embraced Christianity, the early Church fathers decided it was better to incorporate certain aspects of pagan rituals into the new faith rather than attempt to abolish them altogether. Carnivale became a period of abandon and merriment that preceded the penance of Lent, thus giving a Christian interpretation to the ancient custom.

Mardi Gras came to America in 1699 with the French explorer Iberville.  It had been celebrated in Paris since the Middle Ages, where it was a major holiday.

During the early 1800′s public celebrations of Mardi Gras centered around maskers on foot, in carriages and on horseback. The first documented parade occurred in 1837.  In 1857 six New Orleanians saved Mardi Gras by forming the Comus organization. These six men were former members of the Cowbellians, an organization which had put on New Year’s Eve parades in Mobile since 1831. The Comus organization added beauty to Mardi Gras and demonstrated that it could be a safe and festive event. Mardi Gras was canceled during the dark years of 1918 and 1919 when the United States was involved in the First World War. The celebration struggled through the 1920′s and early 30′s, which saw Prohibition and The Great Depression. The krewe of Alla brought carnival to the West Bank in 1934. With the rise of mass produced automobiles, random truck riders had become part of the Mardi Gras scene. In 1835 they organized themselves into the Elkes Krewe of Orleanians. The Krewe of Hermes appeared in 1937 and the Knights of Babylon in 1939. Mardi Gras prospered since the 1940′s, although it was canceled during the war years.