Los Angeles Comic Con wants you to be a part of the fan family as they once again invade their home city in 2022! They’re already busy putting out tentacles to bring in the very best in the geek space, all of it just for you. 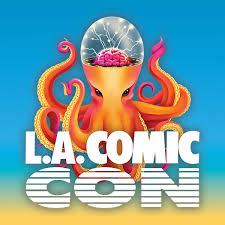 Last year over 100,000 attendees joined in the quest to serve up one of the most diverse and celebrated pop-culture events in the United States, and like a leviathan emerging from the deep, they can’t wait come ashore to do it all again!  Los Angeles Comic Con will play host to hundreds of diverse artists and vendors, selling comics, collectibles, art, toys, apparel, and everything in-between.  Additionally, they are making sure you get up close and personal with some of the biggest and best names in the entertainment industry with a hand-picked selection of panels, events, and meet n’greet opportunities.

A lot of places will tell you they are by the fans and for the fans, but L.A. Comic Con says it and actually mean it!  L.A. Comic Con wants to be your home base. A confluence of comics, gaming, horror, anime, film, television, and that one obscure thing that you thought everyone had forgotten about; it’s all here and that’s what makes this community worth celebrating. So, join in for another weekend none will forget.

Join the contestants on the Main Stage to showcase you and your costumes! All genres are welcome including characters from film, television, theater, comics, video games, sci-fi, anime, horror and even original creations!

This year’s full film festival event will feature over 30 amazing science fiction, horror, fantasy and fan films to satiate every geek fandom. Watch and vote for your favorite films and be part of the Main Stage Awards Presentation where the TOP three films in each category will be awarded Bronze, Silver and Gold Medals and ONE Film will be awarded the L.A. Comic Con Cup, plus this year we’re adding indie film making panels, special screenings and signings at the booth on the Exhibit Floor.